In my last two posts (The Economics of Practice Management, Part 1 and Part 2), the chairman of an AmLaw 100 firm had decided to pursue two initiatives to improve profitability: 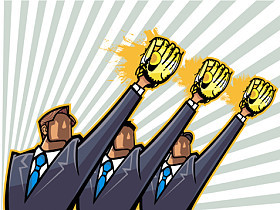 Having decided to move forward with his plans to capture premium work and to move associates more quickly up the work food chain, Keith Mayfield, chairman of an AmLaw 100 firm, considers how to make these plans happen. Moving associates up the work food chain will affect the entire firm. Capturing premium work is intended only for some practice groups.

Keith decides to pilot both efforts in a single practice group – the commercial real estate group. He believes that group has the potential to attract premium work if the skills of the partners could be strengthened. The group has over 100 lawyers in several offices, making it large enough to justify the effort but small enough to be manageable. Keith envisions two programs:  a training program with separate tracks for partners and associates, and creation of an electronic library, or knowledge base, of reference materials and precedent documents. The partner training program will support the initiative to attract premium work. Keith will also need to bring in some lateral partners as part of that effort. The associate training program and knowledge base will support the initiative to move associates up the work food chain.

Find the right guy to run it

Keith knows from past experience that choosing the right partner to run these initiatives is key. He also knows that implementing change within the firm is extremely difficult. If the pilot is successful, rolling out the associate training program more broadly will be even more of a challenge, because it will affect the entire firm.

The practice group head. Keith is stumped at first in choosing the partner to lead the effort. Jeff, the head of the real estate group, is a star in his field, well-respected within the group, good at bringing in business and great at client service. Yet he's not organized, not much of a planner and bad at delegation and management. Getting him to complete his administrative responsibilities within the group, such as conducting partner and associate performance reviews and holding practice group meetings, requires much effort. He's even way behind on billing the many clients he brings in. Jeff is also not as strategic as he should be in deciding what work to take on. Any work is good work to him. As a result, his group takes on too much low margin work, chewing up resources that could be better used for more profitable work.

The senior partner. Keith considers two other partners in the real estate group. Larry is as senior as Jeff, and extremely well-respected within the group. In fact, his colleagues seek him out for advice. He's the de facto knowledge and forms repository for the group. Larry is not well-known outside the firm, however, and is not nearly as much of a business-getter as Jeff.

The rising star. Bob is a newer partner and a rising star. Jeff relies heavily on Bob to support him on deals. There is speculation that some day Bob will succeed Jeff to run the real estate group. Bob is also collegial and well-liked by the lawyers in the group.

Consider the nature of the task

To help Keith decide among the three choices, he makes list of the tasks involved:

In all of these tasks, Keith recognizes that success depends on obtaining buy-in from the lawyers in the group, especially the partners. Whoever runs the initiatives will have to be skilled at that. In any event, the first step is for Keith to get Jeff's buy-in to the overall program. Furthermore, if Keith decides not to put Jeff in charge, he also has to gain Jeff's support for that decision.

The role of administrative staff

Keith has a team of talented administrators on whom he can also rely. The HR Department has handled the hiring of many lateral partners as the firm has grown geographically and sought to rationalize its practice groups. The firm's Professional Development Department has a long history of managing the various in-house lawyer training programs, both those aimed at the firm's broad practice designations (litigation, tax, corporate, etc.) and those designed for specific practice groups. The IT Dept. has a special team that develops new software applications or acquires and adapts existing software for new business needs.

These departments are run by strong and talented people who are, however, not lawyers. While that is undoubtedly a benefit in performing their core jobs, it also means they don't innately understand what makes lawyers tick. More importantly, lawyers will not follow them on a project because, to be brutally honest, lawyers don't understand or necessarily even respect what the administrators do.

Keith's current thinking is that HR and Professional Development will play supporting roles, while the IT Dept. may play a leading role in the knowledge base project. Keith will come to regret the latter decision.

Get the practice group head on board

Keith has decided Jeff should not lead the efforts to bring in lateral partners, develop the partner and associate training programs and establish the knowledge base. That decision may make his task of getting Jeff squarely in support of the program even more difficult. Keith has done this before, though. The key is to understand what makes Jeff tick, then frame the issue in those terms. Because of the importance of the project, Keith will also bargain with Jeff and arrange for pressure from others.

Consider what makes him tick. He knows Jeff is most concerned with his standing in the commercial real estate bar, vis-a-vis both colleagues at other firms and in-house lawyers. He is a frequent speaker at professional events, and chairs committees at professional organizations. Jeff aspires to be nationally recognized as a leading lawyer in his field. Keith arranges dinner with Jeff, which underscores the personal effort Keith is making and Jeff's importance to the project. Keith frames the proposed changes as a strengthening of Jeff's platform. Enhancing the reputation of the group, through hiring key lateral partners and upgrading the skills of its current partners, will make Jeff, as the group's chair, that much more prestigious in the eyes of colleagues and clients. Keith lays out his vision for the program, describing not only the upside potential but also the risks. Keith wants to gain Jeff's trust by being honest, not salesy.

Address his interests. Keith also anticipates Jeff's unspoken concern over remaining group head by promising Jeff that regardless of the new partners brought in or other future developments, Jeff will remain head of the group for at least 5 more years, with his compensation protected. Keith handles the issue of who will run the program by pointing out that Jeff is too valuable in his current role as group head, client-getter and public face of the firm's commercial real estate practice. He knows that Jeff doesn't enjoy internal administrative work and emphasizes how much effort will be required. Reassuring Jeff that he will not lose influence over the project, Keith clears with Jeff his choice to run the program and asks Jeff to take a prominent role in the project, interviewing and signing off on new lateral partners and leading some of the training seminars.

Apply pressure from a third party. Finally, Keith arranges for the general counsel of a major national real estate development firm, which is a significant client of the firm for routine work, to tell Jeff over lunch how delighted he would be if Jeff upgraded his group so he could award more of their premium work to them. Jeff agrees to support the effort, both in substance and visibly within the group.

Keith was successful because he followed proven principles used by leaders of leaders:

These principles have been outlined at length in an excellent book by Fletcher School Professor Jeswald Salacuse, Leading Leaders (AMACOM 2006).

In the next post, Keith Mayfield, the firm's chairman, will seek to fill the critical role of running the initiative. That leader will develop the critical steps to bring the partners of the practice group on board with the lateral hiring and partner training parts of the initiative.